We think of this project like a strange writing onto the city, poetic and playful.
We are interested in going to new places with our work, to connect and see what appears.
Something of what appears will move us in a way that we write, compose, film, dance, play, sing and communicate about it.
What we tell people in Berlin, in Istanbul or wherever is a story which developes itself, while telling it again and again.
In telling something we sometimes just say a few words and move very slowly.
We can be very still, so that the silence and the slowness create an intense focus, where a phrase or a casual gesture talks about the fragility of life.
We are interested in a presence which connects with the incomplete, the half finished, something under construction.
We do find these strange intimacies in Berlin and in Istanbul, because in both cities you find such traces written in the urban space.
What we do is to respond to these traces, by inventing a story and loosing it again, while unexpected things happen during our performance. 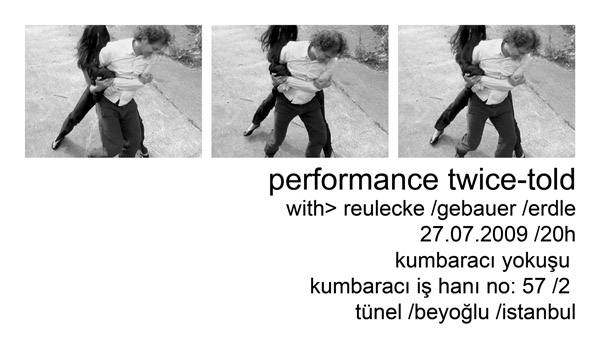